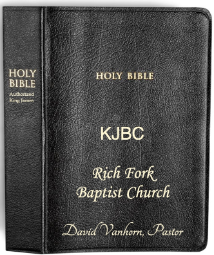 The King James Bible Conference (KJBC) was started in 2002 by Pastor David Vanhorn of the Rich Fork Baptist Church (formerly the Kanawha Two-Mile Bible Church) of Charleston, WV. The inaugural conference highlighted three speakers, Dr. Richard Harper, Dr. Joe Moore, and Dr. Joseph Speciale, rotating turns to bring two messages each night for a week. The initial conference format was defense of the KJV and this format continued through the 10th anniversary of the conference in 2011 (i.e.- KJBC X), which was also the 400th anniversary of the publication of the King James Bible. The conference changed to a prophecy format for seven years, from 2012 (KJBC XI) through 2018 (KJBC XVII), and then to an open format beginning in 2019 (KJBC XVIII). There was not a conference held in 2020 due to the COVID-19 pandemic. Dr. Speciale has had the privilege to teach at all 18 conferences and share the pulpit with some of the greatest preachers including Richard Harper, Joe Moore, Glenn Mathews, Bill Bartlett, David Vanhorn, and Greg Moles.