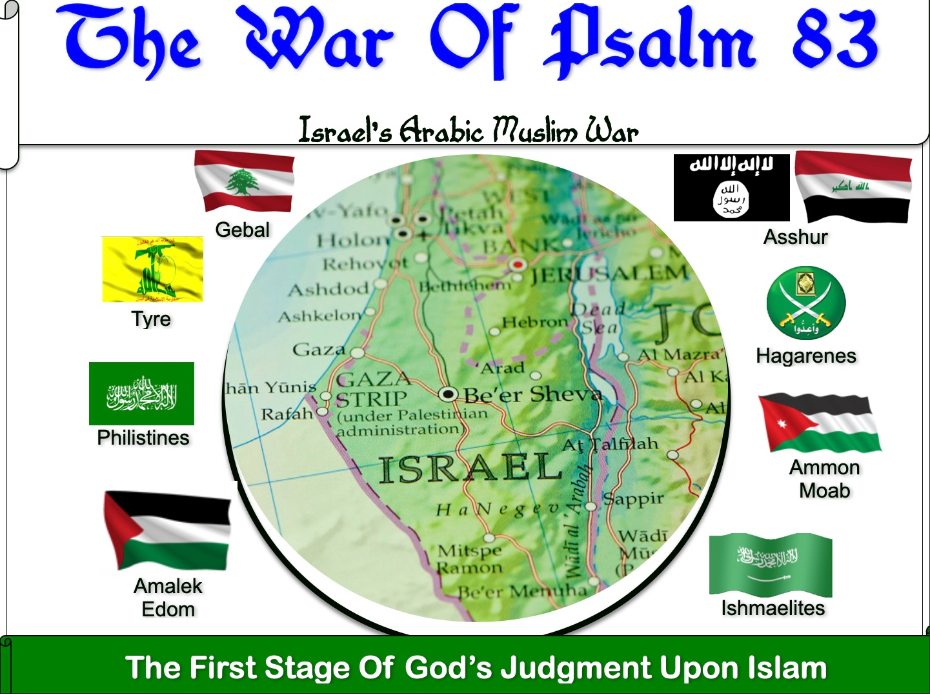 There have been six Arab-Israeli wars since Israel became a nation on May 14, 1948: (1) the War of Independence (1948-1949); (2) the Suez Crisis (1956); (3) the Six-Day War (1967); (4) the Yom Kippur War (1973); (5) the Lebanon War (1982); and (6) the Second Lebanon War (2006). The war of Psalm 83 will be the seventh and it will be the last. A confederacy of Arab-Muslim nations and terror groups that directly border the nation of Israel, possibly led by Jordan (Edom, Ammon, and Moab), launch a massive attack against Israel for the purpose of wiping them off the map. The Arab-Muslim forces will outnumber the Israeli Defense Forces 450 to 1, but the Lord will intervene for his people resulting in the most lopsided victory in military history to that time. It is not just a war between Arab Muslims and Jews but a war between Jehovah, the God of Israel, and Allah, the god of Islam. The outcome will be so dramatic and the Lord's intervention so clear that it will create a spiritual awakening in Israel and conversions among Muslims. The war of Psalm 83 it the first stage of God's judgment upon Islam. These series of lessons provide a verse-by-verse study of Psalm 83 and discuss the cause of the war, the confederacy of the enemy, the conquest of Israel, and the consequences of the Lord's intervention.